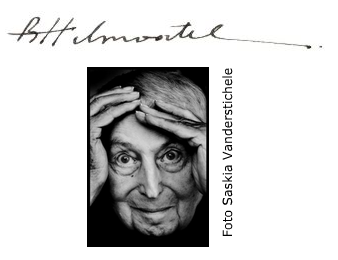 When Robert Helsmoortel was six years old, his father converted the attic of their home near the port of Antwerp into a studio. His father very early on saw the artist in him. Robert Helsmoortel studied at Koninklijke Academie voor Schone Kunsten (Royal Academy of Fine Arts) and Hoger Instituut (Higher Institute) in Antwerp. There, he was taught by artists Walter Vaes and Jacques Gorus, and went on to win several awards. Under the patronage of Queen Elisabeth of Belgium, he travelled to Spain, France and Italy to broaden his artistic pallet. He exhibited in numerous European capitals, staged One Man Shows in Paris and at the Palazzo Strozzi in Firenze, among other places, and created impressive projects for public buildings, such as a mural for the Ingeco building in Barcelona and a canvas of 300mX10m for the entrance hall of the World Expo 58 in Brussels. In 1959, Helsmoortel boarded a cargo ship to embark on a voyage to the United States for what was to be a 6-month study. There, he caught the attention of and was sponsored by Roland Redmond, President of the New York Metropolitan Museum of Art, and exhibited in the Seligman and Poindexter galleries. As he kept drawing and painting, Helsmoortel was swept away by the fascinating innovation of architecture in the United States, and left behind a monumental body of work – monumental in the literal sense of the word: huge sculptures in New York, Florida, Montreal and Mexico, among other places. For example, he created a wall sculpture, commissioned by American Airlines, for Kennedy Airport. For the small town of Ville-Marie in Canada, he designed, in association with architect I.M.Pei, an 18-metre long screen sculpture dubbed ”La plus grande sculpture en aluminium au monde” (the largest aluminium sculpture in the world). For an art collector, he built an immense steel monument in the Atlantic. In 1967, Helsmoortel represented the United States at the international exhibition ‘Artists and Architecture’ in London, where he exhibited together with Andre Bloc, Victor Passmore, Pablo Picasso, Victor Vasarely, Barbara Hepworth and Henry Moore who represented their respective countries there. Robert Helsmoortel created monumental sculptures, bas reliefs, murals and paintings commissioned by highly reputed companies, such as AT&T, Freuhauf Company, Alcan, Steelcase, American Airlines, Time and Life Corporation, Barnett Bank, Kay Rosansky Corporation, and N.B.C. Broadcasting. Work by Robert Helsmoortel can be found in many large collections, including the Art Institute of Chicago, the Whitney-Payson Collection, the Piaget Collection in Geneva and the Royal Collection in Brussels.

Since 2006, impresario Ingrid Verbraeken organizes, in her home country, exhibitions of oil paintings, aquarelles, paintings, sculptures and archived material from Helsmoortel’s body of work with the aim of bringing Belgians, too, into contact with this extraordinary artist.’

Robert Helsmoortel lived and worked in the United States, in New York and Florida, until the year 2000. During the last years of his life, he spent an increasing amount of time in his studio in Antwerp with his Canadian wife. ‘Like an old elephant that goes back to his roots to die’, as he described the return to his home town of Antwerp. He died there on 28 December, 2007, in the place he loved the most: among his works of art.

‘The body of work of sculptor-painter Robert Helsmoortel is based upon the reality of time and space, and is characterized by a simplicity of fluid lines and organic shapes – reflecting the true nature of the universe.

Robert Helsmoortel stayed loyal to the artistic creed of his childhood. He went against the tide of museum kitsch and bad taste. He steered clear of the para-artistic hot air, the blown-up events and the enlargement of the self. His ego-decentrism leaves room – for us, the audience – for inner travel and spiritual freedom. He was a very talented modernist, an incomparable great master of the simple line with a timeless aura.'